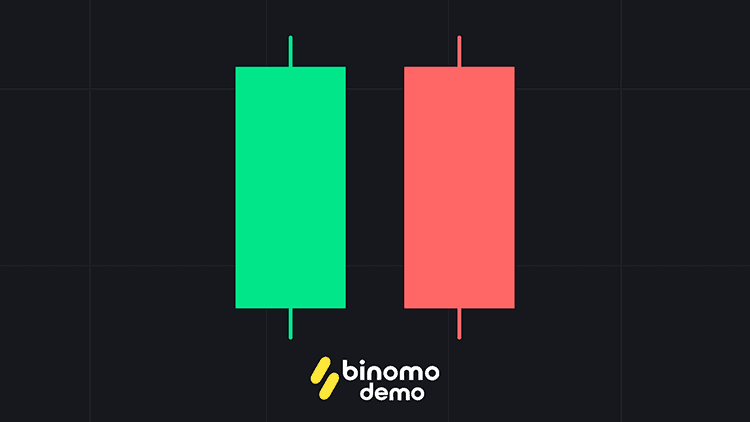 The Japanese candlestick is one of the many technical analysis tools available for traders to make sense of the ups and downs of the market. It originated from a Japanese rice trader named Munehisa Homma, who acknowledged the influence of human emotions on the markets alongside the forces of supply and demand. The technique was first brought to the West by Steve Nison, published in a book entitled “Japanese Candlestick Charting Technique.”

The candlestick is an elegant way of understanding the ups and downs of the market as each symbol carries a wealth of information about the current trends. They are simple, easy to understand, and clear. Because of this, it is one of the most favorite patterns among traders.

If you want to be a successful trader, it’s basically a must for you to thoroughly understand this industry staple. In today’s guide, we’ll tell you all about the different candlesticks on Binomo!

How the Japanese Candlestick is Made

Each ‘candlestick’ is basically a graphical representation of the market events in the time covered. Each tick represents a certain timeframe – in Binomo each candle could represent five seconds or even up to one month. For example, if your chart is a five-second chart, each candle would represent five seconds of market activity, and a succession of these candles describes the price patterns of the market.

Each candle displays 4 price points; the starting price or the opening price, the final price or closing price, the maximum price, and the minimum price. Together, all this information displays accurate historical data of the market that you can then capitalize on as a Binomo trader.

The Candlestick Structure on the Binomo Trading Platform

These candles indicate that the market is experiencing a high volatility period. This means that the price of the security or currency you are trading is experiencing a lot of up and down, and is typically the result of traders reacting to some uncertainty in the environment or the industry.

You can look for such candles on the Binomo platform. They are often present when there is big financial news or a global or industry-specific event that affects people’s expectations on the market price of the commodity. If utilized properly, the Marobozu twins can lead you to good profit. 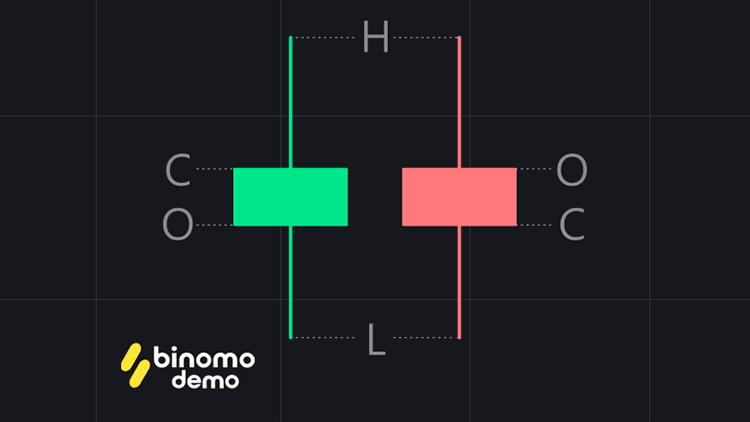 The spinning top is another common, important pattern of the candlestick. You’ll know it is a spinning top when you see a small main body with tall wicks on either side. The length of the wicks may vary, but a spinning top is distinct from the other configurations in the sense that the top and bottom wicks are a little further away from the main body than, say, the hammer pattern.

The spinning top appears when there is indecision in the market. Specifically, when there is indecision and both buyers and sellers are clashing for dominance. The long wicks on the top and bottom are indications that both sides have gained the upper hand at one point, however the short main body in between means that the market closed on the time period relatively unchanged from when it opened.

The Doji also indicates market indecision. It is characterized by a ‘sign mark’ candle or a candle that may look like a ‘T’.It may even look like an upside-down ‘T’. Seeing a doji on your chart means that the closing price is very close to the opening price. The doji might mean trend continuance or trend reversal, depending on the preceding candles.

This signifies that there is roughly no dominance between the bear and bull markets, which is to say that the opening and closing prices are the same.

It resembles a plus mark, with the main body simply being a small horizontal line and the wicks on either end almost the same length.

This doji looks just about the same as the neutral doji, with a horizontal line representing the main body and the long wicks on both the top and bottom. However, the long-legged doji distinguishes itself from the neutral doji by the length of its wicks, which is far more distant.

This means that the clash between sellers and buyers are more rigid and extreme, and signifies greater indecision on the market’s part.

Although quite rare, this doji appears when there is a potential reversal of a downwards trend. These candles look like an uppercase ‘T’, and its appearance indicates that the highest price, opening price, and closing price is the same. This means that although the price remained unchanged, there is significant selling pressure as indicated by the low hanging wick.

To capitalize on the dragonfly doji, it is best to enter the market when the price breaks the candle’s top and exit when the downward wick dips down long enough.

The gravestone doji indicates a bearish reversal. The upside-down uppercase ‘T’, or the complete opposite of the dragonfly doji. In the gravestone, the opening, closing, and lowest prices are the same, but there is significant pressure to buy.

These candles potentially signal an upwards reversal of a downwards trend.

The hammer candle is described by a significant main body but with a long wick at the base. It is usually present in upward trends and signals that the trend is continuing.

The reverse hammer, sometimes called a ‘shooting star’, is merely an upside-down regular hammer. This means it’s a full main body and a long wick at the top. They mostly appear at the base of a downward trend but indicate that the trend is going up.

The Japanese Candlestick is one of the most used trading tools in Binomo. Each candle is jam-packed with useful information and, when analyzed together with other candles, it becomes a powerful analytical tool for predicting future market trends. If you know how to read your candles, then you won’t have any trouble winning trades on the Binomo platform!

Lucky for you, as powerful as it is, it’s not the only tool present in the platform. Try out the Japanese candles along with the variety of tools present in the Binomo platform by registering for a demo account right now, free of charge.